DRAGON BALL Z: KAKAROT arrives on PlayStation 4, Xbox One and PC via STEAM on 17th January 2020. 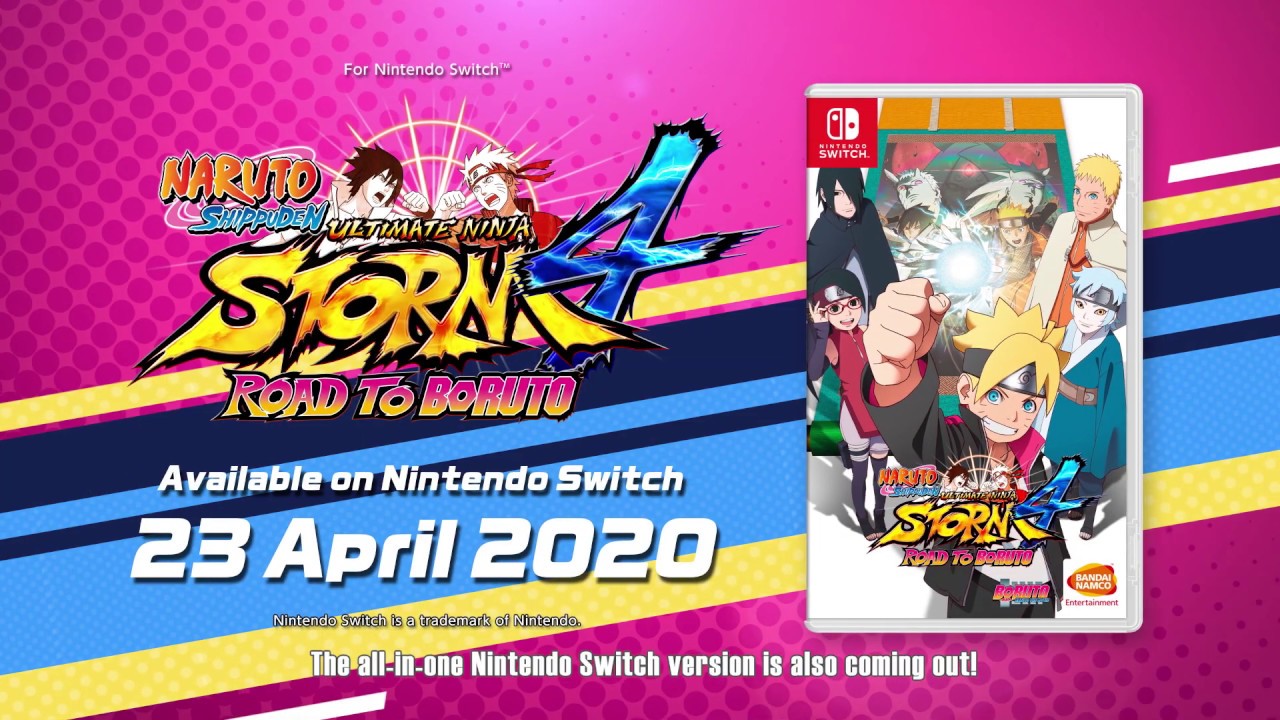 BANDAI NAMCO Entertainment Asia is pleased to announce today that, in celebration of 20 million copies of NARUTO Ultimate Ninja Series sold worldwide, English version of NARUTO SHIPPUDEN: Ultimate Ninja STORM 4 ROAD TO BORUTO will be available on Nintendo Switch™ on 23rd April 2020 in Southeast Asia (Singapore, Malaysia, Thailand, Philippines and Indonesia)! A new promotional trailer has been released simultaneously today with this announcement.

Paid DLC ‘NEXT GENERATIONS’ Update Pack Available for PlayStation🄬4, Xbox One and PC Digital via STEAM® on 24th April 2020!

The ‘NEXT GENERATIONS’ Update Pack available on 24th April 2020 for PlayStation🄬4, Xbox One and PC Digital via STEAM® version includes the new playable characters MomoshikiOtsutsuki and Kinshiki Otsutsuki whom appeared in the final battle of Boruto: Naruto the Movie, as well as new in-game costumes for 11 characters in the BORUTO era such as Ino Yamanaka, Shikamaru Nara, and Choji Akimichi.

The stage has moved on to a new generation…
Finale of the NARUTO SHIPPUDEN Ultimate Ninja Storm series is here!

A collection of exciting stories of the next generation of ninjas that includes the 7th Hokage, Naruto Uzumaki, and his son Boruto Uzumaki. Follow the story of “BORUTO” in a new era of Konoha Hidden Leaf Village and experience the ninja world.

The finale of the NARUTO SHIPPUDEN Ultimate Ninja Storm series will be available for play at home and soon on the go with Nintendo Switch version available on 23rd April 2020!

Content of Update Patch Ver. 1.20:
・Added support for following DLC in “Added Dispatch Mission Set 2”
┗ Added Dispatch: After War Gundam X, For the Coming Generation Mission!
┗ Added Dispatch: ∀ Gundam, Unstoppable Wind Mission!
┗ Added Dispatch: Reconguista in G, Bellri’s War and Aida’s Decision Mission!
┗ Added Dispatch: Mobile Suit Gundam AGE, Endless Times Mission!
・Fixed bug where players are unable to obtain rewards such as units, characters, BGM, character’s abilities, etc after completing the group dispatch mission.
※ For players who have encountered this abnormality will not be able to receive the rewards even after the update patch. Please try again by re-dispatching your group for missions to obtain the rewards.
※ Characters and BGMs will be obtainable through completing group dispatch mission after applying update patch.
・Fixed bug where the initial status would increase or decrease when using ” Refund” of the Upgrade Points which can be obtained when leveling up a unit.
・Fixed bug where the player could not proceed when performing certain operations in STAGE11 “Revealed Intentions ” of “Mobile Suit Gundam Iron-Blooded Orphans”.
・Improved game stability and others.
※The STEAM® version Season Pass and ‘Additional Dispatch Mission Set 1 – 4’ are only available in its entirety. We regret to inform that the dispatch missions are not available separately.

Regarding the confirmed abnormality
We will be investigating the abnormalities that are occurring in this title. Thank you for your continued support.

Solutions
・If the game has been running for a long time, please shut down the console.
・Please update the game to the latest version.
・Please reinstall the game.
・【Nintendo Switch™ version only】 Please format the microSD card. If “Analysis Settings” is turned ON, try changing the setting to OFF.
・【STEAM® version only】 Please restart the STEAM® client.
The abnormality can be solved with the methods mentioned above. We sincerely apologize for the inconveniences caused. Thank you for your kind patience.
We would like to sincerely apologize to all the players for the inconvenience caused, and thank you for your continued support in SD Gundam G Generation Cross Rays.

December free update patch ver.1.20 is available now for PlayStation 4, Xbox One and PC via STEAM.

Update contents are as following.

Various enemies and bosses you defeated are waiting for you in new dungeon “Tower of Trials”. “Mark of Honor” is getable as a reward for challenging the dungeon.

This is an introduction to the Tower of Trials which has been added to the Depths in update ver. 1.20.

In the Tower of Trials, player have a chance to challenge various demons and bosses they have previously encountered. This is a special Depths location where challenger must survive until they reach the Mistle at the very end.

How to reach the Tower of Trials in the Depths

In the Tower of Trials, powerful enemies await you at each level. Defeat them all to advance to the next level. Enemies that appear are different in each Tower and are much stronger than when first encountered in the main story. Additionally, there are no Mistle available throughout the challenge, so make sure you prepare yourself in advance for this survival challenge.

When defeating all the enemies on each level, you may occasionally receive a “Mark of Respect”. This can also be received when playing multiplayer so please be sure to fight together with other Revenants as well. When attempting to match with other Revenants online, be sure to descend to the Depths location prior to sending or receiving a rescue signal.

FAST & FURIOUS CROSSROADS SPEEDS ONTO PLAYSTATION 4, XBOX ONE AND PC IN MAY 2020

Players will travel from the streets of exotic locales to the murky world of international espionage, pulling off high-speed heists and stunts as they battle to take down a new threat.

“Fast & Furious remains one of the most beloved franchises of all time and continues to innovate in extraordinary ways,” said Jim Molinets, SVP of Production, Universal Games and Digital Platforms. “Fast & Furious Crossroads is an authentic experience that stays true to the series by amplifying the signature elements that fans love – a star-studded cast, high-stakes story, over-the-top action, deep family ties and, of course, fast cars.”

“We’re excited to be part of this huge global franchise, and to provide Fast & Furious fans with the opportunity to experience first-hand the action, cars, and gadgets they know and love,” said Katrin Darolle, Director of Publishing, BANDAI NAMCO Entertainment Europe. “We are commited to creating and developing compelling games, and Fast & Furious Crossroads joins an ever-growing line-up of games created by BANDAI NAMCO for fans across the globe.”

“As huge fans of the franchise, it’s an honor to be able to expand the Fast & Furious franchise into the world of video games with a brand new story, the introduction of a new crew with ties to beloved characters, and iconic and stunning set pieces,” said Andy Tudor, Chief Creative Officer, Slightly Mad Studios. “With Easter eggs throughout for fans and an intense multiplayer experience, Fast & Furious Crossroads is a thrilling collision course that puts players behind the wheel.”Fast & Furious Crossroads is being developed by Slightly Mad Studios, which was recently acquired by Codemasters, an award-winning British video game developer and publisher, specializing in high-quality racing games. The game will launch in May 2020 for PlayStation 4, Xbox One and PC.

BANDAI NAMCO Entertainment Asia is pleased to announce that MY HERO One’s Justice 2 for PlayStation®4, Nintendo Switch™, PC via STEAM® and Xbox One (Digital Version) will release on 13th March 2020 in Southeast Asia (Singapore, Malaysia, Thailand, Philippines and Indonesia)! In addition, we will also be revealing information on retail Day-1, digital early purchase bonus and previous purchaser bonus.

Purchase physical package copy of the game from retail store on launch day, or early purchase of a digital copy of the game on PlayStation Store, Xbox Live or STEAM® to enjoy the following bonus digital downloadable contents (DLC):

About My Hero One’s Justice 2

With season 4 airing in October 2019, the popular original series “My Hero Academia” acclaimed by Weekly Shonen Jump welcomes MY HERO One’s Justice 2! The game will be built in a much larger scale than the previous work, which was well-received as a fighting action game! It will be available on PlayStation®4, Nintendo Switch™, PC via STEAM® and Xbox One (Digital release)! Clash head-to-head in the fighting arena and enjoy the thrilling action battle with the superhuman ability “Quirk”!

BANDAI NAMCO Entertainment Asia is pleased to announce the latest trailer for ONE PIECE: PIRATE WARRIORS 4 for PlayStation🄬4, Nintendo Switch™ and Xbox One.

In this trailer, Captain of the Big Mom Pirates, Charlotte Linlin, and the Governor-General of the Beasts Pirate, Kaido, from the “Four Emperors” will be introduced as part of the playable characters in the game. The size, attack range, and power have been greatly magnified into a whole new level as compared to the previous PIRATE WARRIORS series. Watch Big Mom controls the weather with the power of Zeus and Prometheus, which allows attacks of vast range in battles and Kaido transforming into a dragon and destroys many enemies with his brutal attacks. A new unique element, “Aerial Action,” will also be demonstrated in this trailer. Please stay tuned!

What is ONE PIECE: PIRATE WARRIORS? The first ONE PIECE × WARRIORS collaboration was released in 2012. Since then, over 4 million copies of this highly popular ONE PIECE game series have been sold worldwide. Fans enjoy and extol the experience of iconic scenes from ONE PIECE in the game story. Simplified controls and thrilling action mowing down countless enemies are the very characteristics of PIRATE WARRIORS series. What is ONE PIECE: PIRATE WARRIORS 4? The latest work title of the highly popular “PIRATE WARRIORS” series sold over 4 million copies worldwide! The game returns with game developer, Koei Tecmo Games ω-Force replicating the battlefield with destructible environment and particle effects based on conceptualized ONE PIECE’s realism. Furthermore, new elements that were once unthinkable in the past PIRATE WARRIORS series are now incorporated into the exhilarating ONE PIECE Action!

Thank you for playing Jump Force!
The following is an announcement of a new event schedule. 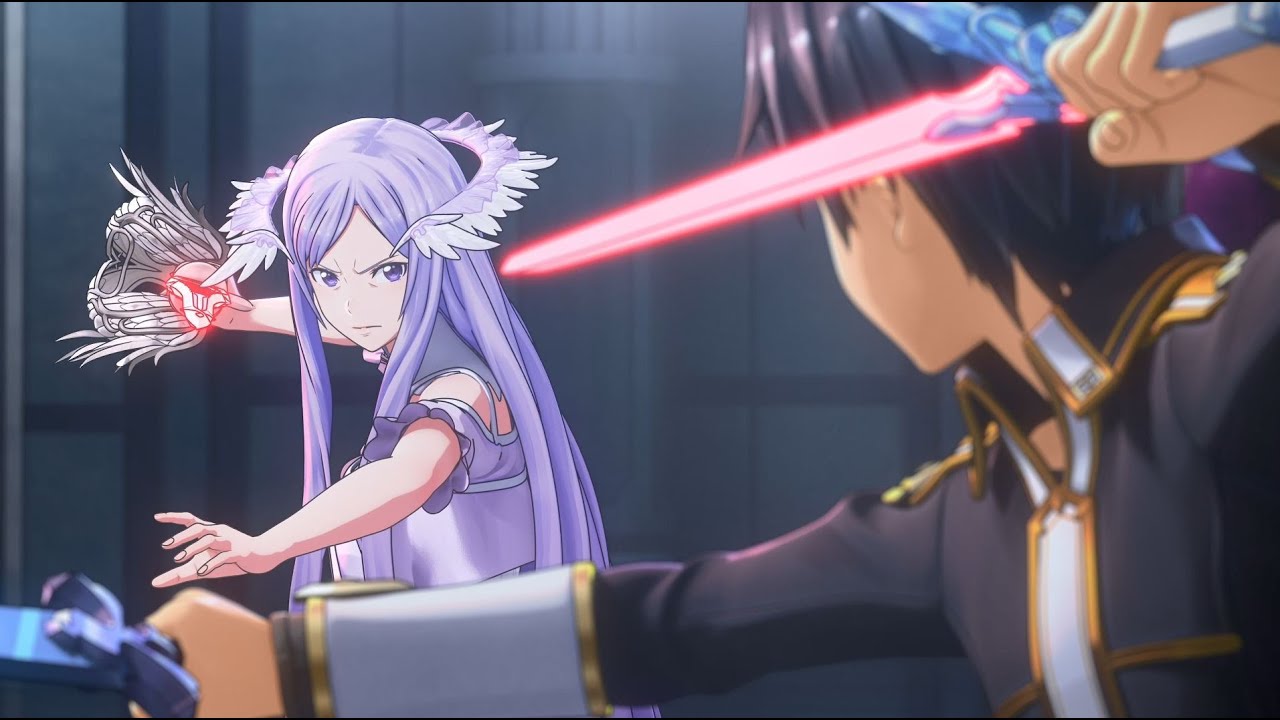 Along with the release date announcement, the physical package Day-1 bonus and a latest trailer with new footage have been released as well.

In the newly released trailer, enjoy the vast “Underworld” in Sword Art Online: Alicization Lycoris illustrated in beautiful graphics that have evolved from one series to another. The game original heroine Medina will be in the game, as well as Deusolbert and Eldrie from the original anime. Do not miss the game original story that will continue from the final episode of the first half of the anime. What will the world become after a death fight with the administrator? Stay tuned to find out.

SINGAPORE – 28 November 2019 – BANDAI NAMCO Entertainment Asia is pleased to announce that SD GUNDAM G GENERATION CROSS RAYS has been released today for the PlayStation®4, Nintendo Switch™ and STEAM® for PC in Southeast Asia. Along with this announcement, a new trailer to celebrate the launch of this game has been revealed today. The launch trailer summarizes the battle scenes, one of the attractions of the “G Generation” series in fast-paced action. Do watch and enjoy this new exhilarating trailer to the end.

After Genesis, 4 new worlds will cross…

Trial Version for PlayStation®4 is now available
Save Data from Trial Version can be migrated to the Full Game Version!

The Trial Version has the following restrictions:
・ Up to LV20 for unit and character growth
・ Up to 2 million capitals (cap.)
・ Up to 50 Cooldown Item